Looking at the image below I wonder if anyone with experience handling lots of blades could tell me about the variety they have seen.

if you imagine the Pinkish color is the Diamond shaped convex geometry of my Hanwei jian, which has the pronounced blade spine. Then look at the other 2 profiles that are both convex, but without a spine. The darker color has such a heavy convex that there is no spine, and its also going to be a heavier less flexible blade and stronger.
the bluer profile at the bottom has the same Edge Thickness and edge toughness as the normal diamond shape, but a lower spineless centre. This would make the blade lighter, and more flexible springy style sword, but it should be just as durable.

http://www.youtube.com/watch?v=bnhjASy7-n8 This video is showing a modern version by JinShi. I think its a Jian like the blue profile. 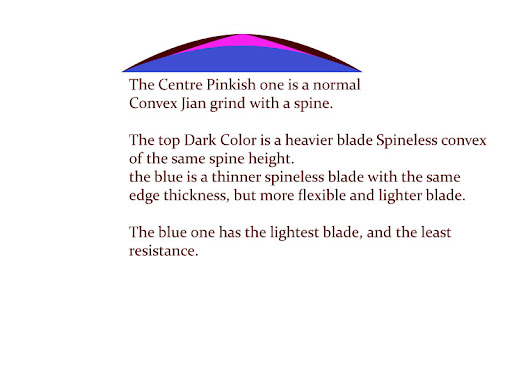 Old jian of some quality usually had a reasonably well-defined to well-defined ridge but with bulge leading to the edge, kind of a hybrid between the styles you show here.

Convex without a spine is seen from time to time but this is mostly to be attributed to quick field-polishing jobs rather than original intent. When polishing such jian, the rounded center ridge often re-appears quickly. It wasn't gone, just less visible because the ridge had become less pronounced. This happened to me when working on a few simple jian but it is also the experience of Philip Tom, who is the most experienced professional restorer of Chinese blades that I know of. (And I probably know them all.)

So although a very, very fine blade is shown in the clip I think the geometry is not what we would commonly find on old jian.

That is a gorgeous blade in the clip, it looks amazing.

I have to wonder how the convex blades that he's making are coping with cutting, I've read your comments about it and I'm distinctly interested. Also how they compare to Zheng Qu's octagonal blades.

Another question to the floor are there any historical examples of the octagonal blades that Zheng Wu produces?

I'm thinking my next blade will be from Garrett to round out my collection a bit.
Top

I'd venture a guess that they pronounce a different wave on impact compared to a blade geometry with a ridge. Otherwise, they would have used that round geometry after a few tries, as you immediately feel it, and this kind of polish is not harder to do than a more ridged one.
Top

Aidan O'Brien wrote:I have to wonder how the convex blades that he's making are coping with cutting, I've read your comments about it and I'm distinctly interested. Also how they compare to Zheng Qu's octagonal blades.

I think the most important factor in cutting is not whether there is a ridge or not but the shape and angle of the sides meeting into the edge. Garrett of Jinshi is quite keen on getting a good historical geometry that performs well so I think we can expect very good cutting ability. We need to note that good cutting and easy cutting are not the same though. A flatter blade geometry will cut more easily but is more prone to damage. Antique blades were designed with strength in mind, sacrificing a bit of sharpness for edge strength durability. That's relative though, they could still take a very sharp edge just not quite as sharp as a thinner blade with flatter geometry.

From what I've heard, the current models already perform very well. Despite the lack of a ridge, the surfaces forming the edge on these appear to be pretty close to the old ones.

Thanks for that Peter. Obviously the angle that the octagonal blades come into the edge allows for extra size behind the edge and protects it from rolling and chipping...

However, are there any historical examples of this? Or is it just something they do or could it possibly have been fairly common and sharpening down over time helped result in the convex shape we see everywhere?
Top

I haven't seen these blades with octagonal cross-section yet, but the only historical ones that come to mind are very early bronze weapons.

Having so much metal behind the edge was a necessity with bronze because it was inherently weaker than steel. When making steel swords it wouldn't make much sense to me to copy a cross-section that was originally designed to be executed in bronze. I do however see a trend in China to copy early non-ferrous sword designs into steel, I have no idea where that comes from but it is far from traditional or practical.

On antique steel swords we rarely see a secondary bevel (which would make a jian a flattened octagonal in cross-section) save for early steel dao with facetted cross-sections that date from the Sui and Tang dynasties.

We have no reasonable evidence to assume they were all made with such an edge. Antiques come to us often in worn condition but sometimes nearly pristine examples are seen that also lack this sharp secondary ridge near the edge. It is also not practical to do so, polishing sharp ridges in a sword is extra work and it is more difficult than a rounded edge while there is no direct advantage for a steel sword in this.

KyleyHarris wrote:Looking at the image below I wonder if anyone with experience handling lots of blades could tell me about the variety they have seen...

This image gives some idea of different edge geometries encountered on period Chinese jian, however one detail is misleading. Some jian did have thinner profiles, that while not as strong as thier thicker counter parts, were much sharper. These thinner blades were however wider than the tougher thicker edge geometry jian. Keep in mind that regardless of edge geometry, jian of equal length are always going to be about the same weight, as a minimum weight is required for cutting efficiency. That weight, or mass of the blade, is going to have to be spread across the width of the blade if it if not in the thickness of the blade.

This thinner blade profile is encountered on later jian. There are two thoughts as to why this is the case. The first is that in the late 19th c., any jian being used in combat were not facing armor. So a sharper blade, that cold slice through cloth was more desirable as there was little chance of the blade being damaged by contact with hard armor. The second thought is that, as the practice of jianfa in the era of widening use of firearms, shifted away from actual use in combat toward strength training, the thinner blade, more springy blade provided the practitioner with a better training tool.
Top

With steel-bladed swords, you see preferences for one or the other in different cultures and for different applications. It may be instructive to look at sword cultures outside of China for illustrative examples. Start with India. The classic style of blade on a typical talwar has a prominent secondary bevel about 3/16 in. wide at the edge. The bevel is rather thick but slightly hollow-ground (most examples were ground with a large diameter wheel). There is enough mass behind the edge to support it if armor has to be cut. Contrast this with the patissa or khanda , which are straight bladed backswords with double-edged tips. These blades are thin wide and flexible, with no ridges or fullers. The thinness allows for a very acute and sharp edge, fine for slashing through voluminous cloth garments of an opponent but not so durable against armor or hard objects.

Next, let's travel to the German-speaking countries, plus Poland and Hungary. Executioners there favored a straight, double-edged blade without a point for decapitations. The Richtschwert is fullered for rigidity for less than a foot at the forte, then tapers to a thin, lenticular section that's just right for the intended purpose. The cross-section is somewhat thicker than that of the Indian backswords mentioned above, and would be analogous to the lenticular jian blades discussed in previous posts, albeit of somewhat greater width.

In short, there's no one way to skin the cat and both types of cross-sections have their advantages.
Phil
Top
Post Reply
9 posts • Page 1 of 1